We are the descendants of kings and queens that were enslaved not by choice.

The story of Black Nova Scotians is a rich history.  The book of negroes give a more in depth picture of the story of freeing slaves to Nova Scotia.  The story is quite the eye-opener to the slave trade.  It is intense and is awakening.  We are the tapestry of many diverse groups – Loyalists, Maroons, Caribbeans, Refugees and others.  This melting pot merged together through a common African ancestry and the search for a better life in Nova Scotia.

The Book of Negroes’ Nova Scotia

Based on the award-winning novel by Lawrence Hill, The book of Negroes  tells the story of Aminata Diallo, from her abduction in Africa as a child and trans-Atlantic journey into the slave trade in America, to her escape to freedom in Nova Scotia, and onto her final journey back to her homeland of Africa. The book’s title, The Book of Negroes, is the name of the historic British military ledger that registered 3,000 Black Loyalists who sailed from New York City to Nova Scotia in 1783.

Dolly Williams is well known for her Social Activism works in the communities of Halifax Regional Municipality and across Canada.  Dolly was born and raised in the Community of East Preston, Nova Scotia Canada.  Dolly believes that family and community is very important and we must give back. Over the years her and husband Sinclair Williams Sr. have support many people those less fortunate in all aspects.

WOMEN WHO MADE A DIFFERENCE

This book was written by Dolly Williams 2007

This amazing woman is a power house who is an accomplished professional. She is an advisor to government, academic institutions, business and communities. She is respected for her work in the areas of leadership, immigrant women and girls, diversity and inclusion, employment equity, human rights, sexual harassment, systemic discrimination, addressing unconscious bias and other social justice issues.

Ann is world travel and have been involved for her innovativeness and creative style of leadership.

Her groundbreaking work with the Black Business Initiative, led to the development of a new training program for women called the “Business Cohort for Women Leadership Training.” This is five weeks program was designed and delivered for women by Ann.  I had the opportunity to take her program she is dynamic and empowering.  Her main focus is empowering and transforming woman of all ethnicities.

She is a respected member of the diverse communities she serves.

In the 20th century it feels as though the clock has turned back to the days of slavery and segregation for black and indigenous people or eventually will become.  Can’t we all get along god created all of us in his image and likeness.  We should be our brother’s keeper of all nations.   Where is the love!

Black Lives Matter (BLM) is an international activist movement, originating in the World, that campaigns against violence and systemic racism toward black people.  Black lives have been profiled and disrespected for centuries.

A number of conferences all over the world has been created to stop this ageless of racism and to speak out against.  I have friends and family who have been constantly profiled by the police department.   Why do they need a quota that they need to have each month?   Perhaps it is a game of roulette to constantly try to break down the spirits of Black and Aboriginal people.

“Being pulled over by the police for me,” the Nova Scotia resident said, taking a pause, “it’s normal.”

Taylor, 42, estimates he has been stopped by police an average of three times a year. The student support worker at Dartmouth High School in said it usually happens on his drive to work. “Is it racial profiling? Possibly.”

He’s not surprised to hear a CBC News Investigation finding that Halifax police are more likely to stop and check people who are black.

In fact, according to information released by Halifax Regional Police, black people are three times more likely to be the subject of a so-called street check than white individuals.

Halifax police started collecting the data in 2005, two years after a human rights board of inquiry found boxer Kirk Johnson was discriminated against because of his race when he was pulled over and his car was seized in Dartmouth in 1998.  Inquiry chair Philip Girard ordered police to pay Johnson $10,000 in damages. Girard also ordered police to provide racial sensitivity training for all officers and to start collecting statistics on the race of all drivers stopped by police.

Former boxer seeks apology, compensation from Halifax police for discrimination. Police discriminated against black boxer: ruling Police told CBC News the data on street checks was not prompted by the Johnson case. Blais and deputy police Chief Bill Moore confirmed that at no time in 11 years of collecting statistics on street checks did anyone with Halifax Regional Police analyze the data.

There are so many others who have not come forward because of fear.   You only need to fear Jesus Christ our eternal judge.   In Gods eyes we all matter and should be treated with the privileges of other races.  Well we were all created in the image of God.

Gathering held in Halifax in solidarity with Black Lives Matter movement. A number of communities had marches and marches to bring awareness of this ongoing concern for Blacks and Aboriginals.

The groups gathered as part of United We Stand, which are ceremonies happening on both sides of the border. Rather than a protest, the small group elected to hold a traditional aboriginal sharing circle.

I can just imagine what he went through as the first black police officer.  But yet he encouraged others from the community so that we have a voice.   He helped so many people endlessly in the Black communities and recruited people in the communities for his businesses.   This was his way of giving back.   I can just imagine if he were still living how disgusted and disappointed he would be of the community people being profiled based on their race and other rhetoric. 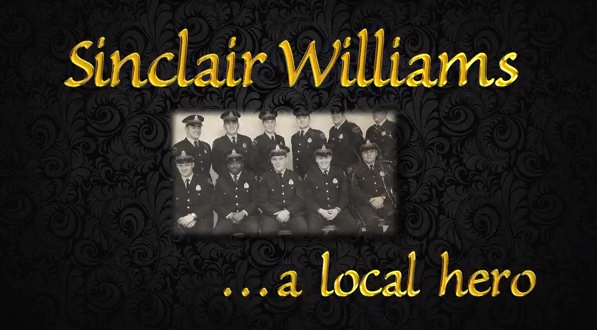 A group of East Preston youth and seniors—working with Halifax video company Pink Dog Productions— are celebrated one of their local African-Nova Scotian heroes with a documentary-style short video.

The series is called Empowerful, and the first entry in the project—a video on East Preston’s Sinclair Williams, the first African Nova Scotian member of the Dartmouth detachment of the HRM Police—had screen at the East Preston Rec Centre .

Sinclair worked in many jobs before becoming the First Black Police Officer hired by the City of Dartmouth in July 1968. He received a number of awards & recognitions from the Dartmouth Police Department for outstanding bravery. Along with his wife owned and operated Hilda Ann Enterprises, where they built over 30 homes in Cole Harbour, Colby Village, Eastern Passage, Lake Echo & the Preston area. He employed men from the Communities and through this; many of these men have since formed their own companies. He volunteered at the Bell Park Academic Centre as a mentor with youth with challenges. He was a role model for many in the Preston Community who became Police & RCMP Officers. He has been honored and recognized by many for his outstanding volunteer work in the Community of East Preston and beyond.

He received the 125 year Canada Celebration Medallion. He volunteered and served his community in many capacities through the Lions, East Preston Recreation Association, Sarah Jane Clayton Manor, Preston Area Housing Fund & Dartmouth East Black Learning Centre. Sinclair was the founding member of the District 8 Volunteer Fire Department, where he was appointed the first Captain for East Preston. This motivated many other community members to become volunteer fire fighters. While her neighbourhood was diverse, issues of inequality influenced Francis’ higher education and working life to compel her to try to affect change.   She focused on personnel and labour relations issues issues that affect the quality of people’s lives on a daily basis and issues that seek rectification through public bodies.

Francis’ efforts to bring about equality and inclusiveness have been recognized by a Harry Jerome Award from the Black Business and Professional Association, the Multicultural Education Council of Nova Scotia Award, and the Golden Jubilee Medal.

Lieutenant Governor Mayann E. Francis was the first woman ombudsman of Nova Scotia and when she became lieutenant-governor of Nova Scotia in September 2006, she became the first Black Nova Scotian and the second Black Canadian (after Lincoln Alexander of Hamilton, Ontario) to hold this position.

In 2016  she became Dal’s first employment equity specialist, Ms. Francis astutely managed the implementation of pioneering non-discriminatory policies and procedures. She has given more than 30 talks and workshops at or on behalf of the university and has served on the board of the Indigenous Black and Mi’kmaq Program of the Schulich School of Law.

In 1987 Judge Corrine Sparks secured her spot in history by becoming the first African Nova Scotian to receive appointment to the judiciary and the first African Canadian female to serve on the bench. Sparks adjudicates family court cases relating to custody, child and spousal support, access, and child protection. She supports judicial education, developing educational programs and lecturing on that and gender and racial discrimination and the courts. Sparks works with the Commonwealth Judicial Educational Center, which promotes judicial education and her work has earned her numerous awards and recognition. Sparks’ humble beginnings in segregated Nova Scotia left much to overcome. But she succeeded through hard work, a willingness to challenge, and a strong belief in her faith.

Many believe the history of blacks in North America is the story of the African-American experience. Little known outside Canada is the history of the resettlement of the Black Loyalists around 1783 and the “black refugees” after 1812. Sparks traces her ancestors from both these events in African Nova Scotian history. “I would say that my family lineage is typical of most African Nova Scotians here in our little province,” Sparks said. “Race relations and slavery in Canada took their twists and turns through history, often paralleling the black struggle in the United States.”

Sparks entered middle and high school, educational opportunities for blacks were still few. But Sparks was fortunate enough to have teachers who believed in her. “They saw my potential, something I did not recognize in myself. My elementary school teachers took an interest in me.

From the community of East Preston, Nova Scotia

With her vision for a daycare in the community, she sought the help of a group of five ladies and their local Member of the Legislature. “I went on faith,” Rev. Dr. Ross explains. “We were offered an acre of land for $800 and we raised funds to buy it. I had faith in the promises of seniors to donate building supplies and other businesses offering work in kind. It was a lot of promises. When we started, we had $1.86 in the bank.”

It took five years to complete the daycare space, but they opened it in June 1974. The building had no furnishings, but the group decided to take a break over the summer to rest. The building’s total cost $156,000, and they were $24,000 in debt, but their MLA found grants to cover certain programs. The total grant money was $24,000. “We started debt-free in September. That’s what faith can do.”

The daycare started with nine staff and 34 children. When Rev. Dr. Ross retired 30 years later, there were 27 employees and 165 children in two spaces. Her work during that time included adult education, community outreach, and supports for infants to seniors. Her voice is uncharacteristically proud when she talks about the daycare. “We put through doctors, teachers, lawyers, pastors…their children are now coming to the centre and supporting it.